The event that drove this project has come and gone: Trumpeter's Salute. This was my fist Wargames Convention. I had attended a couple of Games Workshop events with my son and his friends back in the oughties as well as 4 Astro-nomicon tournaments that I really enjoyed. It was great to see such a variety of events and Pulp Alley was well  represented with David running two games on our tables and LAF's Wirelizard running three (I think...) on his table. Here are a few pictures from the Saturday games as well as a link to an Imgur album at the bottom with many more.

First off the 4 pictures from our games. Pulp Alley proved to be popular; we had 7 players around a 3x3 table for our first game and 5 for our second. Wirelizard's table was also crowded with similar numbers. Here David takes control of the game: 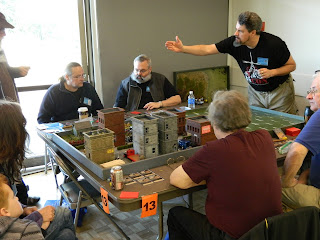 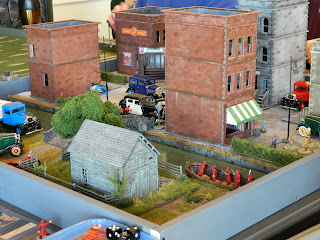 After the claustrophobic urban table we reduced the terrain for The Perilous Island. 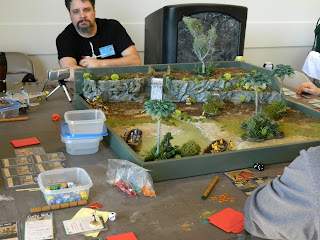 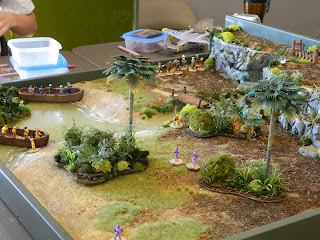 David was awesome- entertaining, keeping the game rolling and energetic for all 8 hours of play(!!!)

Wirelizard's game shows how versatile the rule set is. His game was set in 17thC England and had Parlimentarians and Royalists sniffing around the tiny town of Dwmchurch-on-fen (never heard of it? I think it sank...).  The game looked really good; awesome terrain and fish people crawling all over the place. I should have got a couple of pics of the minis but I was trying not to be intrusive as people played. 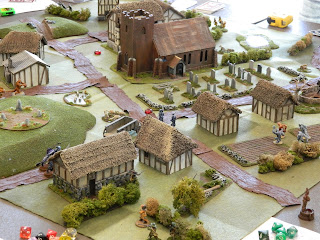 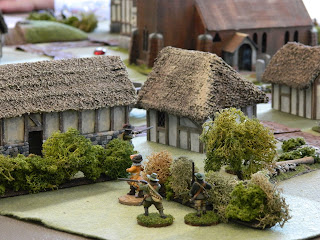 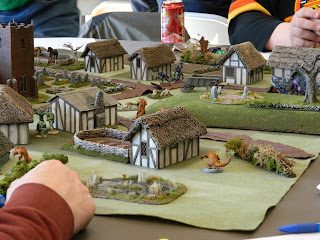 As seems obligatory, here is a picture of the "loot" I collected. This is all stuff that I would normally have to buy online and cover shipping; furthermore there was a show discount that virtually wiped out the tax. The LoTR stuff on the right I bought at the Bring and Buy and the whole lot cost $70CDN- quite a bargoon. 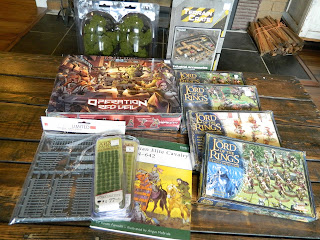 There is about 40 more pictures in this Imgur album. If I could do it all again I would have concentrated on a few tables and taken lots of pictures, and kept track of the action so I could offer a bit more info than what I was able to collect.