Not much to show this week. I have spent a lot time working on a water board that I am not dissatisfied with. I have started and quit on it three times now. I did manage to get my resin water poured for the jungle table and make a little waterfall; it is removable so the secret cave entrance can be revealed.

The ocean water is Fibre-Tek Crystal Clear Casting Resin. As it was my first time using casting resin I made some mistakes, the big one being pouring too thick. I should have done 4 or 5 thin pours instead of 2 thicker ones. This resulted in bubbles which were also the result of air trapped in the foam foliage I used for seaweed. The product itself is quite viscous so it doesn't run over the surface into all the nooks and crannies; this also makes doing thin pours a little more challenging. In the end the result is acceptable and I will know better next time. For the record, cost wise it is better value than Gloss Hodge Podge, better represents water but is trickier to use and is flammable and toxic. 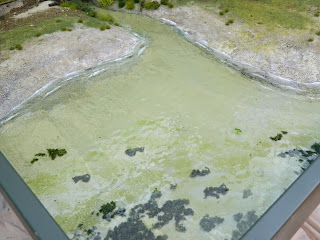 As I poured the resin too thick (I may have also used too much hardening agent), when it dried it retracted and pulled up a bit where it met the shoreline. I dabbed white tub and tile caulk to create the crests of gently breaking waves. 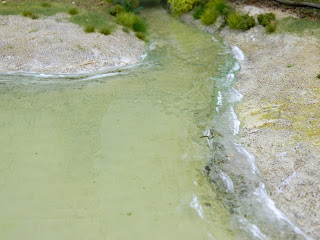 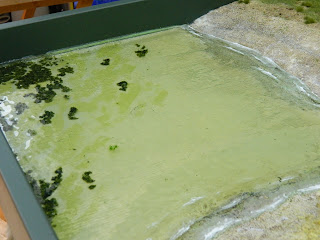 For the waterfall I used a piece of clear plastic as a base; smeared a layer of clear silicone caulking, scribing lines in it as it dried.After the silicone set I used the same tub and tile caulk as before and dabbed it over top to represent white water and foam. 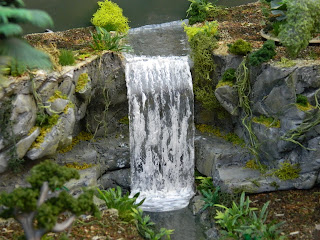 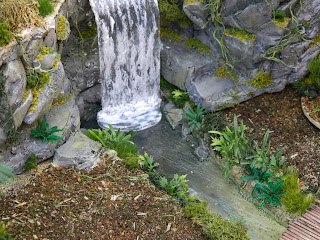 Seemed like a good time to take another shot of the whole table... 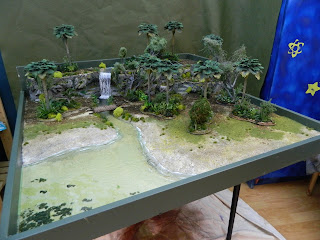 I have a Sarissa Precision south seas hut I could put together for the table but as it stands there is already quite a bit of terrain on it. I may yet make it. I was going to make a stone idol as well, possibly as a plot point, but David already has several plot points lined up that are smaller and therefore would take up less space on an already crowded table.

Email ThisBlogThis!Share to TwitterShare to FacebookShare to Pinterest
Labels: jungle