A few years ago before he passed away Bluebear Jeff introduced me to Pulp Alley. In all honesty, it wasn't really my kind of game. At the time I was more interested in larger figure count games; I had just finished a medieval Muslim army for WAB/Hail Caesar/whatever and was working my through a ECW Royalist army (still not finished...).  Jeff had a considerable collection of Bob Murch figures and wanted to see them on the table so he and David (Murdock's Mauraders), his son and I played a few games. A great system; very flexible and well thought out; with the emphasis on narrative it could just as easily be used for Sci-Fi adventures as well as fantasy quests. It got me thinking about all the small detailed terrain boards you could make.

Not long ago I approached David about a joint project: I would make some terrain and he would develop a linked campaign. We decided on 2 tables for sure: a south seas island jungle table with a waterfall with "secret" entrance; a early 20th century urban table (possibly Chicago, San Franscisco?). The third table is not for sure yet- possibly some caves or caverns.  The project we hope to have done for Trumpeter's Salute 2018.

The first table to get attention is the jungle table. I have already done some testing with the usual aquarium plant jungle growth but I started on the structure of the table in earnest last weekend after getting my Mordheim table to game-able level of completion. I started with 2.5cm insulation foam board on 1cm plywood. 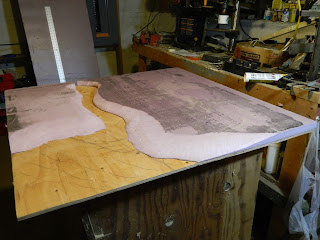 I added the foundation of the cliff the waterfall will fall over with two pieces of 5cm foam . 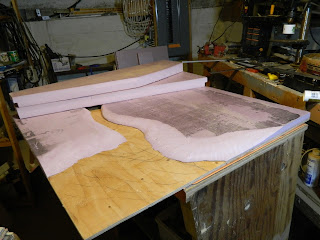 I then carved into the face and added pieces, glued in place with Gorilla Glue. 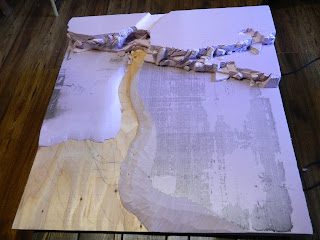 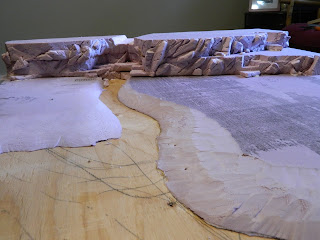 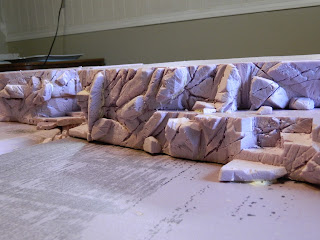 Smaller pieces were added to the base and in the creek. 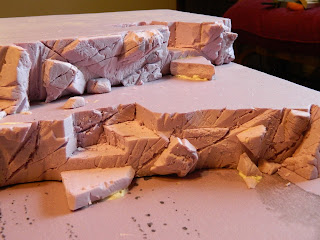 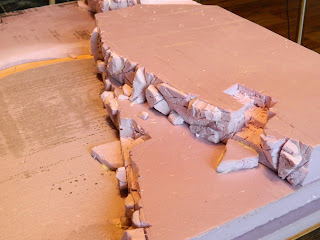 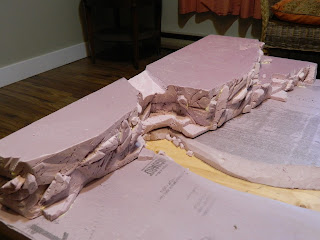 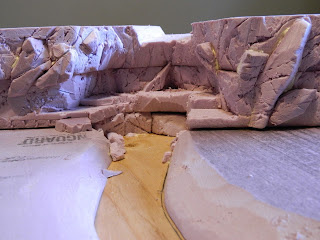 Next up I will cover the foam with plaster soaked paper and apply sculptamold to the rocks and cliff face to add texture.
at October 29, 2017

Email ThisBlogThis!Share to TwitterShare to FacebookShare to Pinterest
Labels: jungle